On the 28th November we had the pleasure of interviewing Chesterfield Ladies super star Gina Camfield. We had many questions for her [29].


When she arrived we stood and looked in bewilderment at her broken leg! She showed resilience and came to see us. We all felt downhearted for her as she would not be able to play until next season.

To start us off, we all introduced ourselves to her: our first question was to ask her how she got into football and she said a couple of her friends played it so she started playing at school as a result she enjoyed playing the game. She started wanting to be a professional at the age of 12. She has always wanted to play for Arsenal but ended up starting off her career at Bristol City, at the age of 16 she joined Chesterfield Ladies FC. To achieve this dream she had to go through 10 years of football. She trains at Shirebrook Academy twice a week and playing a tiring game once a week.

She got her dreadful injury by trying to skip past the defender but they reached a leg out for the ball, but she got caught on the shin. Within a second she was on the floor in pain!

If you would like to be a super star like Gina, she said ‘never stop practicing.’ We all enjoyed interviewing her and wish her the best to get back playing and scoring again. 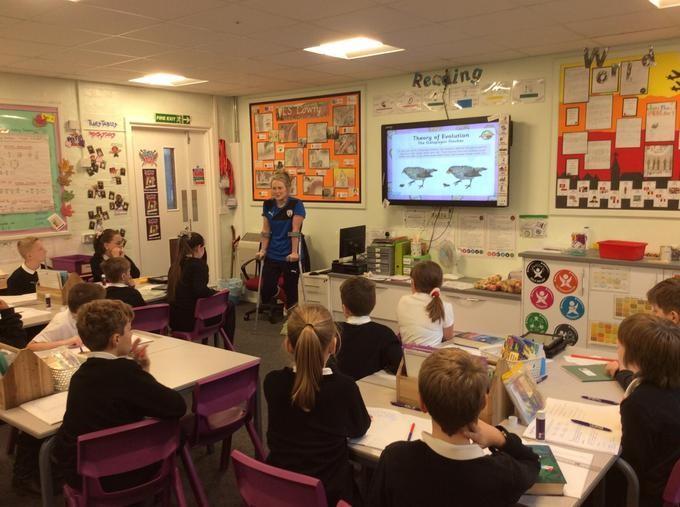 On the 12th March 2020 Shauna from PDSA   told us how to look after our pets properly. At first she went into the Explorers to inform them how to look after their pets. Then the whole school got together so she could give us all an assembly. She talked to us about the history of the PDSA and who created the charity, (Maria Dickin). She told us about two cases that they had successfully treated, We were shocked to learn that it costs over a million pounds each week to treat sick and injured pets like Shinji [a kitten]who fell three floors and Shadow[a dog] who got ran over by a bicycle ; cut open his liver. They treat an animal every 5 seconds.

During the workshops in the classes, she taught us the 5 Welfare needs so we can keep our pets safe .They are: a home, care, food, water exercise, friends/family unfortunately they have a high possibility of dying if they don’t have these obligatory needs. Cats, dogs and rabbits are the most common pets PDSA treat so Shauna taught us how to look after these pets .Dogs are the UK’s number 1 pet as they’re really energetic and fun animals to play with.

As a school we are working towards the Pet Wise bronze award and we already have 400 points – we need to get 600 more points to achieve our goal of 1000 .We have already done some activities which should give us another 350 points.

On the 9th January 2020 a lady from Ghana came into our school and she taught us African dances.

At one point we did a mating call from West Africa and it involved lots of squealing, humming and looking and sounding like a bull. We also acted like we were basketball players, football players, runners & Usain Bolt. Doing the rain dance involved running around in circles and squealing and jumping.

Later in the day, we did a painting inspired by a type painting called Batik. We used blue in lines and then purple over it. The blue still bled through and it made a lovely Galaxy pattern. Then we did a black border and if we had time a few patterns, you could do whatever pattern you wanted, but it had to fit on the piece of cloth, some people put zig zags or made up symbols or even random lines and curves.  Some people had one big pattern others had 10 small patterns.

One child in year 3 said “fun”

Another in year 2 quoted “crazy”!

Food Will (Maybe) Destroy The World…

Food Pollution is when food travels from distant countries using vehicles that pollute the environment. It is a problem we should be more worried about. The more we pollute, the more we destroy the earth’s shield against meteorites and the Sun’s UV light.  The more UV light that comes through the atmosphere the more likely people will get severe sun burn and sun burn can lead to skin cancer, which can be lethal. So if we don’t stop it, it could get out of control and burn up our atmosphere and we might end up like Mercury (about 435C) or Mars or Venus!! This is a very serious situation since there isn’t any water, food, air, life!! So try and get food from local places not places like Brazil, Australia and other places far away. It won’t matter if you have Brazilian food in Brazil or Australian food in Australia but try not to have things from places far away from where you are. So eat local things instead of things from abroad. Support our farmers and food producers!

What is green energy?

The other type of electricity, is made of coals, oils, and natural gasses, these will eventually run out but meanwhile they are polluting our planet. Our world needs to think about the future before it is too LATE.

The often festival was on the 27th of September and had art everywhere: mythical clay eggs in a prison, a mermeration in a church, we also watched a play about King Alfred because Alfreton is named after him. Laila, Liam and James also played a little game and James won so he got to sit on the golden toilet and became king Alfred’s knight ,he also got into prison and he had to ‘scoop the poop’ but so did the other contestants. James came out on top (of the golden toilet) leaving the other phoney knights (and the burnt cakes) in the dust.

Explorers made brilliant naughty buses. They made the shape of it out of cardboard. For the wheels  they put dowels through the middle and put wooden wheels on the end

to make them roll .”They worked pretty well and looked great, “Said Mrs Coupe the infant teacher. The finished product had more glitter on the buses than in the pot.

On Wednesday 18th of September we raised £242.71p for Macmillan cancer support. James and Grace were going mad selling cakes. All the parents and carers thankfully donated cakes for the whole school to have one .Tea and coffee was made by Mrs Russel and Mrs Tucker. Macmillan try to raise money to help people with cancer have a good time. Cancer can affect any part of the body and any-one.  The Macmillan nurses help people with the dreadful disease by making them have a good time and forget their illness.

This year’s Halloween Disco was very

Well populated and these are the

We would like to thank the friends of Westhouses

For all your organisation to the event.

The school trip was quite a time for Class 3… On Thursday 13th of October, Class 3 travelled to a village called Eyam. Eyam was one of the first places to catch The Plague (if you don’t know, the Plague was a terrible disease that spread across Europe near about the Tudors). The trip was exciting for Class 3 as it involved  seeing the Hancock family graves, climbing down a narrow rocky mountain, visiting Mompesson’s well (some pupils even threw extra change into the well), the museum (that was very educational) and lots of other cool places.

The trek down the mountain seems to be the favourite part for Class 3. The mountain was quite fun for them, because it was a good laugh if someone slipped and screamed like a girl. The mountain edge was a little narrow to start with, but eventually the road widened out. “It was scary for me going along the narrow mountain edge. On one side of me was a barbed wire and the other side was a couple meters drop down to a little river running down alongside the other mountain side,” said an anonymous student while on the trip.

All throughout the trip, Class 3 were sorted into groups. The gift shop at the museum was quite an amusement for Class 3, being everything was ‘So cool!’ in there. Most groups took quite a while to choose what they wanted.

Class 3 learnt lots about the Plague and Eyam during their exciting trip. And (hopefully) they enjoyed it too!

To teach Class 2   how hard it was to live as a stone age person and taught us how to make arrows, make bracelets, she taught us how to make flour with a grindstone, and she had a box of tools and a big box of sand (there was 6  boxes and 3 in each group). We had to dig up things she had buried and then we had an empty tray and we had to put the things we found in the empty  tray. Mrs. Paish also taught us how to weave and make string from wool.  The first hour we did the excavation and we did a little showcase of what we found. In the second hour we made the bracelets, weaved, made arrows and made flour from wheat and barley seeds on a grindstone.  Everyone had so much fun. Thank you Mrs. Paish

Unfortunately not the ones with chocolate chips.

Some cookies are necessary in order to make this website function correctly. These are set by default and whilst you can block or delete them by changing your browser settings, some functionality such as being able to log in to the website will not work if you do this. The necessary cookies set on this website are as follows:

A 'sessionid' token is required for logging in to the website and we also use a 'crfstoken' token to prevent cross site request forgery.

Cookies that are not necessary to make the website work, but which enable additional functionality, can also be set. By default these cookies are disabled, but you can choose to enable them below: