Our Pupil Voice with their brand new 'Smilers' poster on the front of the school! Smilers promotes wellbeing in school and the community.

Pupil Voice would like  to introduce you to 'SMILERS' this is an initiative to promote well-being in our school community. The older Pupil Voice members have introduced 'SMILERS' to the whole school during an assembly on 25/04/2022. We will be doing various things in school to promote well-being, there will also be some easy activities for you and your child to do at home (nothing too strenuous we promise). As we progress with 'SMILERS' there will be information on the school website, we hope that you will take a look to see what we are doing :)

Pupil Voice have been looking at and discussing a child friendly anti-bullying policy for Westhouses. They decided what they thought should be in the policy and how they wanted the front cover to look. They also researched, help organisations online and suggested that there are links to these on the school website. The Junior children who are members of Pupil Voice have been attending online training to become anti-stigma ambassadors. So far they have completed 3 sessions - 2 more to go! We will keep you updated when we finish our training.

2 years ago Pupil Voice planted these flowers and they have bloomed once again!

Pupil Voice have been looking at equality and have created this poster to feature around school to promote people treating each other with kindness.

Pupil Voice spoke to Philosophers all about how our Parliament works, and to Trailblazers to explore our laws in the UK as part of UK Parliament Week.

Year 5&6 have been creating garlands, daisy chains, nature themed mobiles and creating flower bombs to plant around the village.

Our Pupil Voice have been hard at work creating an anti-bulling poster. This can be found stuck up in the Headteacher's office.

Our 2 youngest members of Pupil Voice have been out planting primroses in the planter on the front of the school. 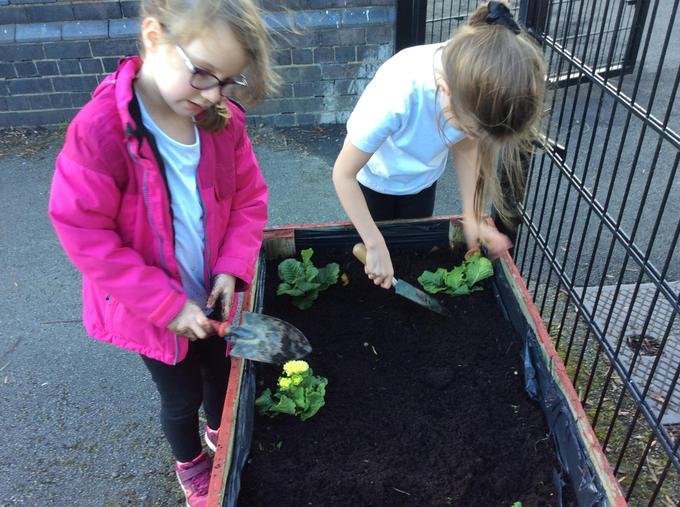 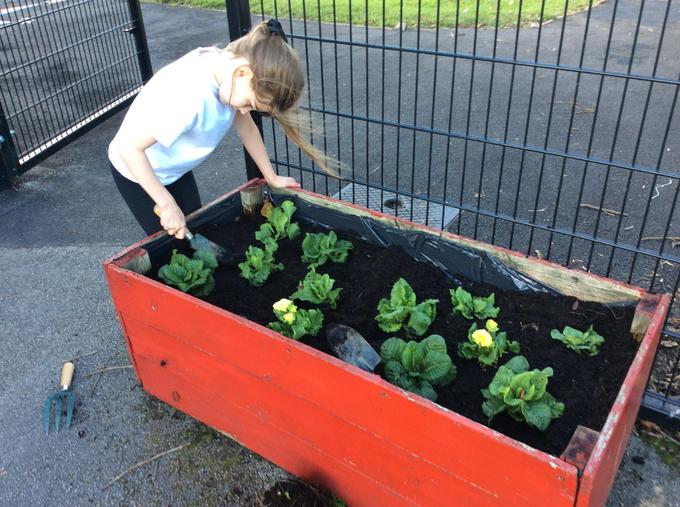 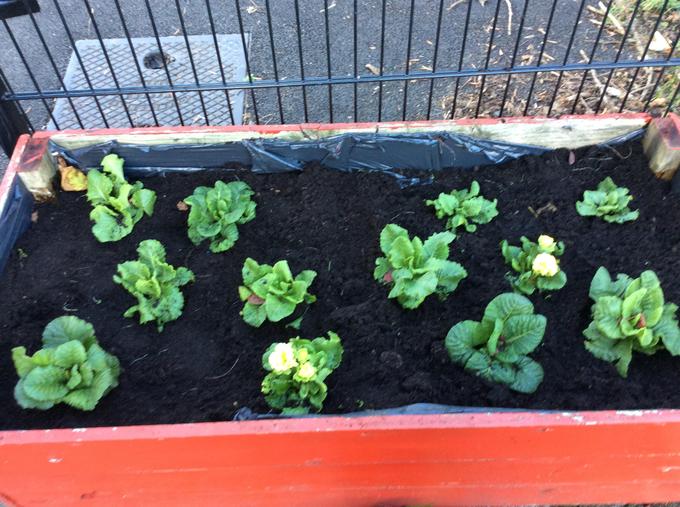 Pupil Voice paint make and decorate bird houses. Big thank you to Pam who also donated a bee-house for our school.

Pupil Voice have updated the Nature Area noticeboard. It's all about Bats! 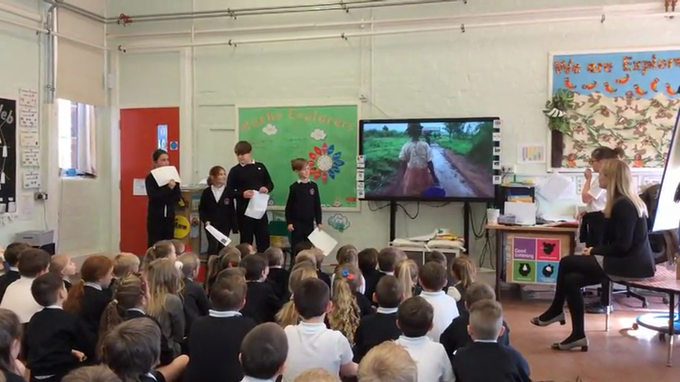 When we arrived we were invited into Tibshelf School’s hall we had a drink and a biscuit. When everybody arrived we got to know each other. Then we did an activity which was about what we do to express our emotions. Then we went around and wrote on other school’s sheets. After that we did a few more activities; then it was lunch we enjoyed it. After that we did an activity where we went to a different school council and did an acrostic poem with the alphabet and thought of words for mindfulness. To finish off we did a listening activity then as we left we got an anti-stigma ambassador badge; we headed back to school! Thanks Tibshelf School!!

Bird Boxes. Pupil voice have been hard at working writing a letter to Mr Walters to see if he could make them some bird boxes. The new bird boxes are suitable for 3 different types of bird (at pupil voices request). Thank you Mr Walters!

This year Westhouses Primary School wore yellow to raise awareness for Mental Health. Pupil Voice also went to a 5PP meeting to dicuss the topic. Check our these pictures from their trip to Tibshelf Town End.

Pupil voice have been collecting old batteries to recycle for the big battery bank! In total they have collected a whopping 32kg of batteries. Well done guys! 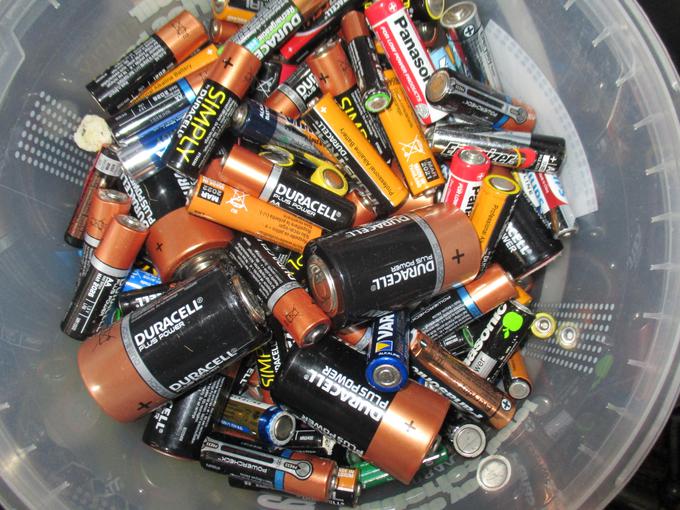 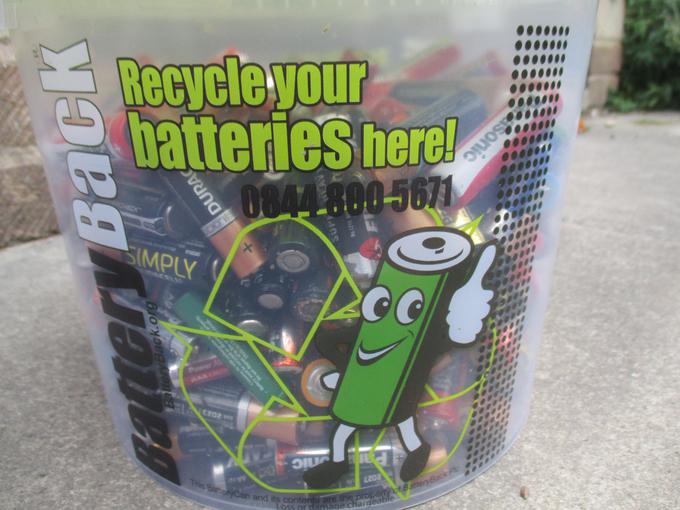 Pupil Voice organised a picnic to celebrate 100 years since some women first got the vote.

We sent for a special pack from EqualiTeas.org.uk, this included posters, debate cards, a recipe from the head pastry chef at the House of Commons for shortbread and a game.

We decided to use the recipe as a competition for the ‘best shortbread baker’. We felt like we were judging Bake Off! Our winner was Olivia Wilson out of Year 2 (well done) and thank you to all those who took part.

Our school cook prepared a special picnic lunch for us and parents were invited to join us and had a dress code of green, white and purple – suffragette colours, a friend of Mrs Tucker spent time making some rosettes for us to wear.

We also invited a special speaker (a business woman) to our picnic and to speak at assembly about equality in the UK today. Thank you Dusky Edwards for giving up your time to come and visit us and doing a special assembly.

Later in the afternoon we held a debate about school uniform – for and against – with Blackwell School. We argued against a uniform and Blackwell argued for a uniform. We enjoyed the debate and good points were put over by both sides. Thank you, Blackwell pupils and member of staff for joining us on our special day.

We hope that everyone who joined us enjoyed their day and we would like to say thank you again to everyone who helped to make our celebration special. 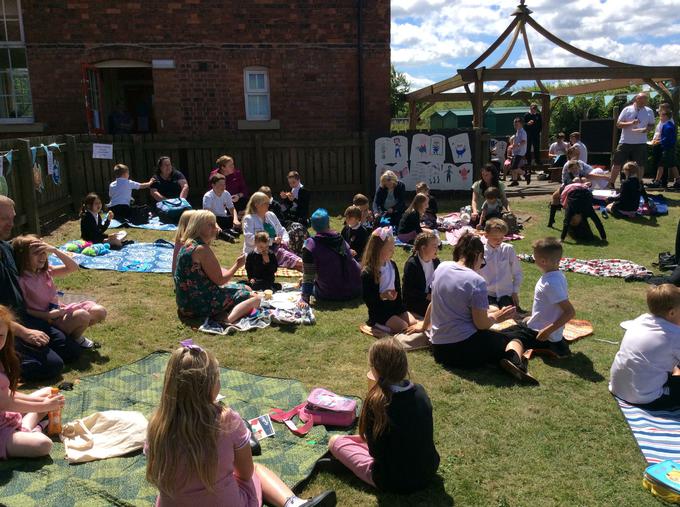 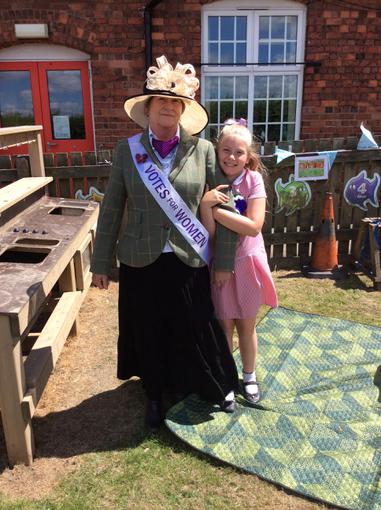 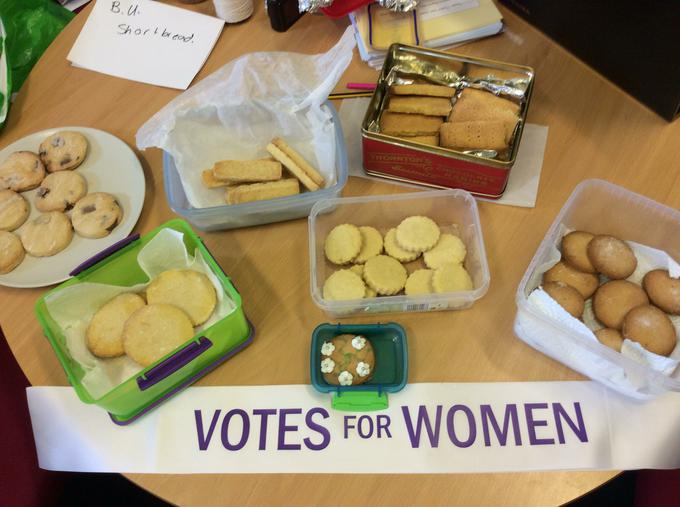 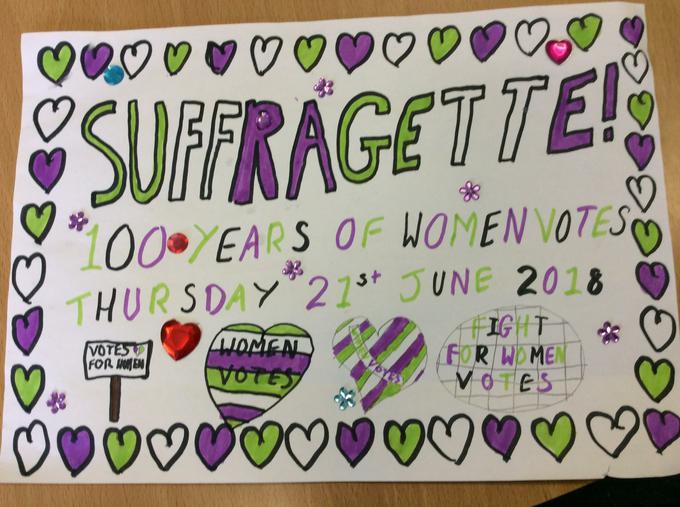 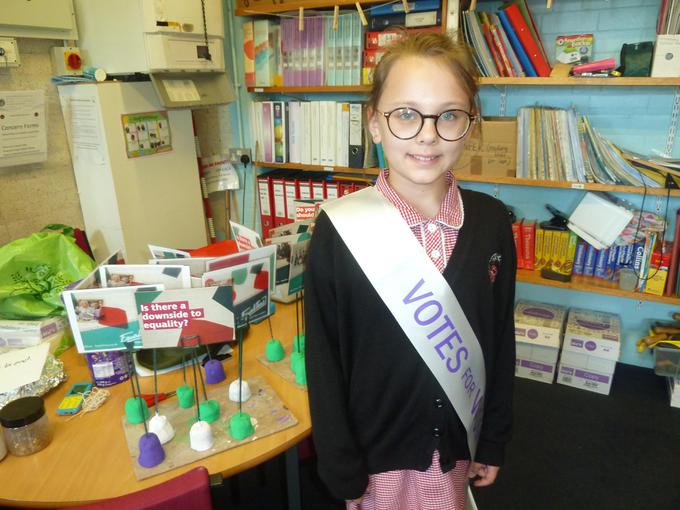 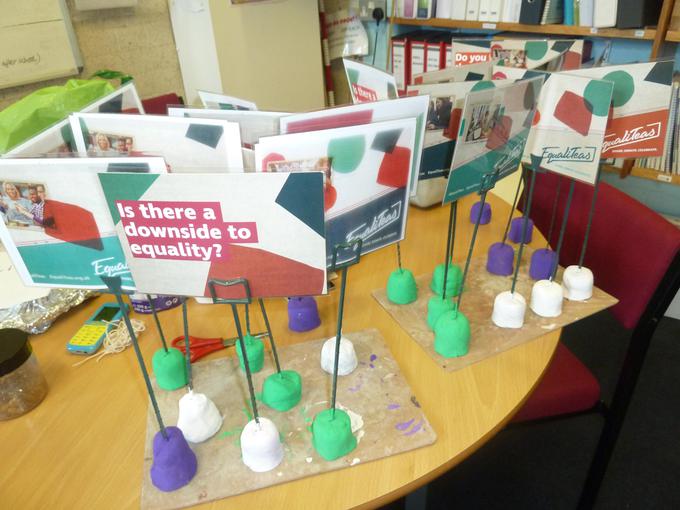 Our Achievements May to July 2018

All the collections for Pupil Voice. Bird feeders to follow soon!

On Thursday 19th November 2017, four members of Pupil Voice visited Shirland School to do a workshop on anti-bullying.

First we went inside to their hall and watched a movie about bullying, while we waited for the other schools to arrive.

Then we sat and watched a play performed by Tibshelf Secondary School, which was very good.

After that we went to the tables and everything was set out for us to make some anti-bullying bunting, the children from Tibshelf helped us with this, we enjoyed doing our bunting.

Later in the week some of our classes at Westhouses also made some anti-bullying bunting and it was put along the fence at our school.

Thank you Shirland School for hosting this event.

Our Nature area at school. 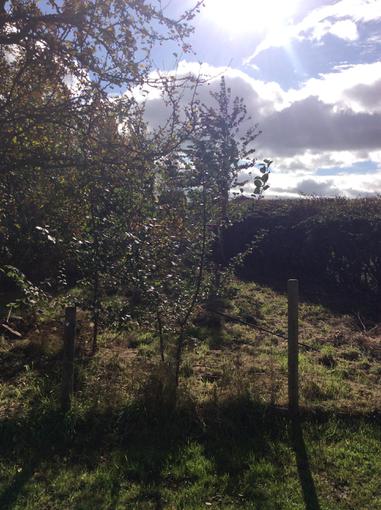 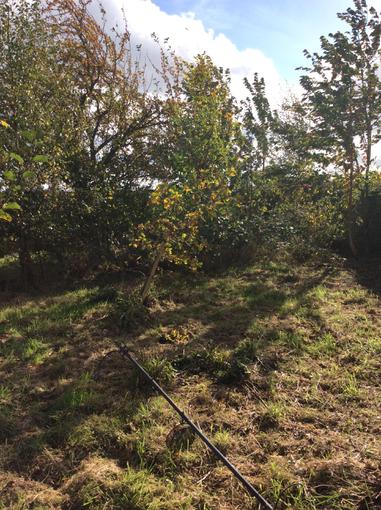 . Announced to school assembly that we want to tidy up nature area.

. Photo’s taken of nature area as it is now (photo’s to be taken as we tidy up).

. Investigated how to make a wildlife pond.

. Wrote letter to ask for bird boxes and notice board.

. Put in stake and tied upright an oak tree.

. Discussed putting a path in the nature area.

. Talked about setting up a nature table for pupils to display any nature/wildlife items they might find.

. Made poster for the shed.

. Wrote letter about old pots and pans for the mud kitchen.

. Ask gardening club if they will help us clean up the nature area.

. We have made scooter club to two days not just one.

. We have planted cornflower and golden jubilee in nature area.

. Wrote a letter to YPO about faulty toys, we had a reply and returned the toys we are now awaiting further reply.

First we started off by going around and telling other schools about our school and them doing the same to us and we had 5 minutes each to do that.

It was interesting learning about other schools in the 5 pit partnership. We found it interesting that Stonebroom School had 3 pigs, 1 cockerel, 3 chickens, 3 chicks and might be getting a kid (baby goat). We were amazed how one school could have 154 children in it. There were many other schools that had a greater amount of children than us.

We had a talk about FIDGET SPINNERS…

Every school except one had banned them, as they were disrupting lessons.
At the end we all got a biscuit. All of the schools were very kind and friendly. We had a good time. Thank you to Blackwell School for hosting the event.

We are Pupil Voice!

Our aims as Pupil Voice are:

Today representatives of Pupil Voice (Ella, Jamie, Elijah, Lilly) went to Tibshelf Community School to have a discussion with other school councillors. Amazingly, Mr Dennis Edward Skinner, also known as the Beast of Bolsover, was there, which was really thrilling for us.

He told us the ways he works and how he does his job. Did you know that many years ago Mr Dennis Edward Skinner saved our school from being closed down from a lack of pupils?.

Class 3 will have a chance to meet Dennis Skinner, Member of Parliament, as Jamie has written to invite him. He told us that he also saved Bolsover School because it was held up by a pit prop.

After he talked we all got into groups and talked about what we could do next time we meet up. Then we played a skittle game where we answered these questions e.g. red was: what is your favourite subject and why? Orange was: would you rather wrestle with a lion or would you fight a shark? The winner of the 5 pit partnership challenge was a girl named Libi from Tibshelf Town End. Thanks for participating.

We saw all the other school counsellors like Tibshelf Town End, Morton and Newton.

To sum it all up it was a fantastic experience

and we enjoyed when Mr Skinner told us all about his job and how he had exaggerated to get Tibshelf a new school. It was great fun with the skittles Ice-breaker and we talked about what we could do next time we meet up. We loved it.

Our achievements between October and December 2016.

Unfortunately not the ones with chocolate chips.

Some cookies are necessary in order to make this website function correctly. These are set by default and whilst you can block or delete them by changing your browser settings, some functionality such as being able to log in to the website will not work if you do this. The necessary cookies set on this website are as follows:

Cookies that are not necessary to make the website work, but which enable additional functionality, can also be set. By default these cookies are disabled, but you can choose to enable them below: